Meet the people who make it happen at EASY MEASURE. 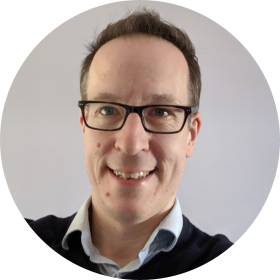 Ian and Neil shared an interest in human brain morphology. Ian was interested in locating gyri and sulci using third-order robust features of surfaces such as ridges and sub-parabolic lines, while Neil was concerned with estimating brain structure volume and surface area using stereology.

Mike began his PhD in 1994, supervised by Neil, which resulted in the building of an application called EASY MEASURE that enables computer-based application of stereological methods for estimating volume, surface area and length. In Mike's PhD thesis, he uses EASY MEASURE to estimate the mean thickness of the cerebral cortex in six formalin-fixed brains and one paradigm in-vivo MR brain dataset.

After Mike completed his PhD in 1999, Neil, Mike and Vicky McNulty collaborated on a paper entitled, "The benefit of stereology for quantitative radiology" that was published in the British Journal of Radiology (BJR) in 2000 (PMID: 11089458).

Mike spent the next 20 years in the commercial sector, where he worked predominantly as a software developer and systems architect for Reuters, building scalable, secure and resilient mission critical applications on-premises and in the AWS public cloud.

During those years, Mike maintained a connection with academia, through his support for EASY MEASURE and a contribution to Carolyn Furlong's paper entitled "Application of stereological methods to estimate post-mortem brain surface area using 3T MRI" published in Magnetic Resonance Imaging 2013 (PMID: 23238418).

With the growth of computing, technology and the wide abundance of data combined with advancements in image analysis and artificial intelligence, Mike decided in the summer of 2020 that the time was right to launch EASY MEASURE, a company focussed on building a modern, innovative and intuitive platform that promotes collaboration and democratises medical image analysis.